For nearly thirty years, Hollywood has occasionally visited the proverbial well of a popular video game for inspiration for a movie. Until very recently, this trend went from disastrous to, at best, mixed results. Even with all this, there are still many of us who have either forgotten or were never aware of the uneasy relationship between videogames and the silver screen. So, join me as I re-visit some of the biggest duds and recent hits throughout the past three decades. Mario. Everyone knows who he is; The jolly Italian plumber who, along with his much taller brother, Luigi, go on many adventures in the mushroom kingdom while irritating the bulky, spiked turtle-shelled, fire breathing Bowser. Mario’s had 2 animated series, and countless merchandise along with multitudes of games across many Nintendo console platforms. However you wouldn’t be in the wrong for wondering why such a global phenomenon has yet to have an outing on the silver screen. Let me remind all of you of the trainwreck known as Super Mario Bros.: The Movie.

In the early 1990’s, Walt Disney Studios acquired the rights from Nintendo in order to produce a movie based on the budding Super Mario Bros franchise.  Given free creative license (with little to no interference) by Nintendo,  screenwriters Parker Bennett, Terry Runte and Ed Solomon approached the film’s story as a sort of subversive comedy with a quirky and dark tone, with influences from Ghostbusters (1984) and The Wizard of Oz. The setting was primarily inspired by the game Super Mario World, released for the Super Nintendo console in 1991. With other elements drawn from fairy tales and contemporary American culture, the production also innovated and introduced many filmmaking techniques now considered pivotal in the transition from practical to digital visual effects. Super Mario Bros.: The Movie‘s cast consisted big name actors such as Dennis Hopper (Speed, Blue Velvet) as Bowser, along with Bob Hoskins (Who Framed Roger Rabbit?, Hook) and John Leguizamo (The Pest, Romeo and Juliet) as Mario and Luigi respectively. 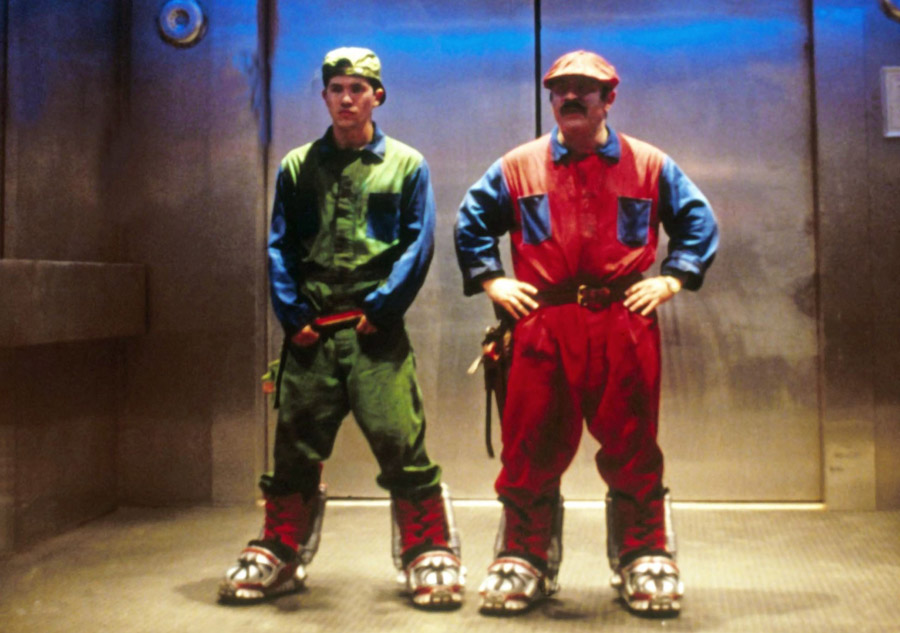 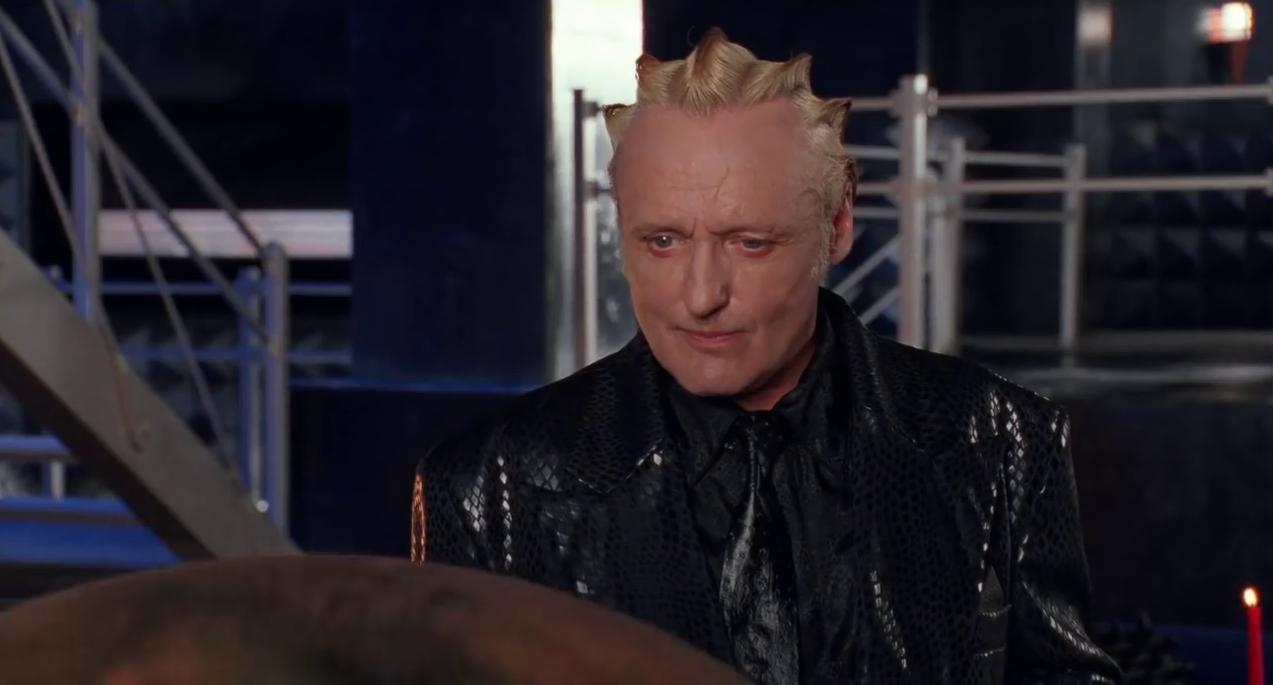 Released on May 28, 1993, the film was a critical and financial failure, grossing $38.9 million worldwide, against a budget of $42–48 million. Reviewers praised the innovative special effects, creative artistic direction, and the performances of its actors, but criticized the confusing narrative, lack of similarity to the games and inconsistent tone. Mario creator Shigeru Miyamoto felt the film tried too hard to replicate the games instead of being a good film. In a 2020 retrospective for SyFy, writer Tim Grierson reflects on how nearly everyone involved in the film hated it, including John Leguizamo during an interview on a late night talk show, along with another studio’s plans for an animated outing for Mario:

“No one involved with Super Mario Bros. has a nice thing to say about it. Even two years ago, Leguizamo went on Late Night With Seth Meyers to lament that he turned down a part, ironically, in Tom Hanks’ Philadelphia in order to play Luigi. But for fans of the game who hated what Hollywood did to the Mario Brothers, redemption may be on the horizon: A few years ago, Illumination (the company behind Despicable Me) began pursuing plans to do an animated Super Mario Bros.

“I like that this was not done well the first time,” Illumination founder Chris Meledandri said in 2018. “I think that’s more exciting or more worthy than simply making another version of a film that was done incredibly well to begin with.”

Safe to say, he’d have to try pretty hard to make a film that’s even worse.”

Despite how much everyone involved (and a lot of Mario fans) hate it, the film has garnered a cult following in recent years.

By the mid 1990’s, fighting games were all the rage. There were quite a few popular titles in arcades and consoles all over the world. So, it was only a matter of time before at least one of them would be adapted in a feature film. A film based on Capcom’s Street Fighter was released by Universal Pictures a year earlier. Not even the star power of Jean-Claude Van Damme could save that film, and to this day, it suffers a worse hazing than Super Mario Bros.: The Movie ever could. However,  on August 18, 1995, another film based on a fighting game would become the first video-game based movie to have moderate success. If you haven’t figured out which film I’m referring to, I can yell only two words that can describe it:

I know what you’re thinking; “didn’t a Mortal Kombat movie just come out this past weekend?” You’re right, but we’ll get to that later. For now, let’s re-visit the original. 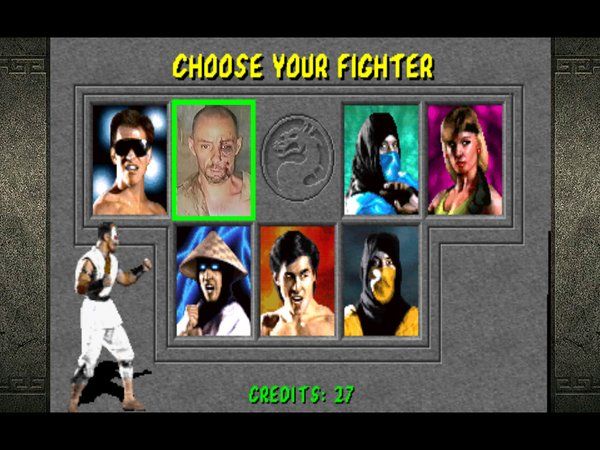 The first installment of the Mortal Kombat games, was released in arcades by Midway Games in 1992, with the console version being released one year later. Two years after the release of the game’s sequel, New Line Cinema released the first feature film on August 18, 1995, and despite its obvious bit of camp (and poorly aged CGI), gained a much better reception then Street Fighter and Super Mario Bros: The Movie before it. In a retrospective for Vox, writer Aja Romano reflects on the biggest reason why her, and apparently other fans, have loved Mortal Kombat so much over the past three decades.

“Perhaps what’s best about Mortal Kombat is what most fans came for back in 1995: the fighting itself. Thanks to the still-early days of CGI technology, the fighting is mostly Hong Kong-style martial arts performed with then-cutting-edge wire work. This was two years before The Matrix, so wuxia-style fighting was still pretty new to US viewers. Many of the actors were trained martial arts actors like Shou, and many of them insisted on doing their own stunts. So most of the fight scenes truly look like they’re being carried out by real people. And despite the movie’s flimsy writing, everyone involved seems to be having fun.”

Mortal Kombat would also be the directorial debut of Paul W.S. Anderson, who would become a key figure in the evolution of the video game movie sub-genre.

The main problem is that you have a very strong core audience who expect a lot from a movie like this. Resident Evil is their favourite game and they’ve been playing it for seven or eight years, and now some asshole film maker is going to come along and mess it all up and ruin it. That tends to be what they’re scared of.

Speaking of Paul W.S. Anderson, 2002 would mark another turning point for video game movies thanks to not only Anderson, but the actress who would later become his wife– Mila Jovovich, as she was cast as Alice (a character created just for the films). The first film based on Capcom’s zombie horror series,  Resident Evil, was released that year… to seemingly the groans of hardcore fans of the games, due to the movie straying very far from the source material, (which was a concern he seemed to express during the above BBC interview) and the panning of many critics. However, the movie made about $103,787,401 worldwide. Back in 2002, that was a hell of lot of bread. Due to the first films large grosses, Resident Evil would spawn a franchise of 5 more films, spanning about 15 years. 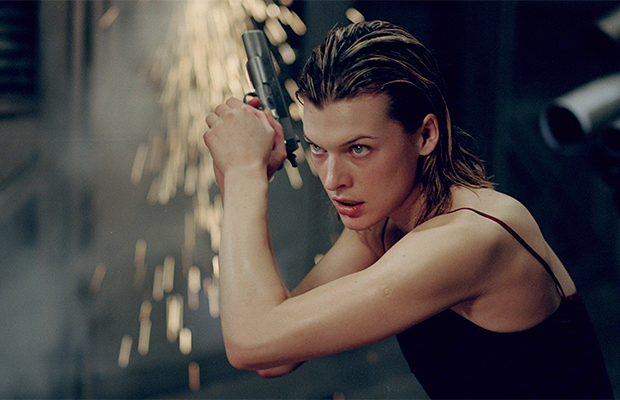 After so many years of mediocrity it seems that Hollywood would eventually give audiences higher quality film adaptations of their favorite pixilated protagonists….

Grierson, Tim. This Week In Genre History: Super Mario Bros. The Movie Gets An Instant ‘Game Over’. SyFy. Published May 27, 2020. (https://www.syfy.com/syfywire/super-mario-bros-movie-genre-history)